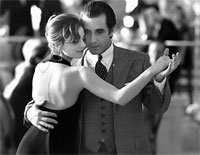 "Por una Cabeza" is an Argentine tango with music and lyrics written in 1935 by Carlos Gardel and Alfredo Le Pera respectively. The tango has since been performed by numerous tango orchestras. Tango scenes with "Por una Cabeza" appear in Delicatessen (1991), Scent of a Woman (1992), Schindler's List (1993), True Lies (1994), Titanic (1996), Bad Santa (Uncut Version, 2003), All the King's Men (2006), Planet 51 (2009), episode 37 of Nip/Tuck (2003–2010), episode 9 of South Korean drama series Sweet Spy (2005–08), the beginning and ending credits of the South Korean drama broadcast I'm Sorry, I Love You (2004), and the CSI: NY episode "Down the Rabbit Hole" (2007). In the movie Frida (Salma Hayek, 2002), Gardel is heard singing it on a radio. It is also quoted in David Del Tredici's "Good News! Nilda is Back" (from the song cycle Miz Inez Sez). In Scent of a Woman (1992), the tango is performed by the "The Tango Project",consisting of William Schimmel (accordion), Michael Sahl (piano) and Stan Kurtis (violin), who actually appear in the dancing scene starring Al Pacino (the recording used is available on one of their CD albums). John Williams arranged a version of the piece that appears on the album "Cinema Serenade" with the violin solo performed by Itzhak Perlman. Perlman and Williams (conducting) have also performed the piece together in live concerts. In 2012 a dance version was released by the group "Da Carrera" featuring the original vocal recording by Carlos Gardel. "Por una Cabeza" is well known by people and if you like it, you can also download free Por una Cabeza sheet music to play with Everyone Piano. Just Enjoy It!