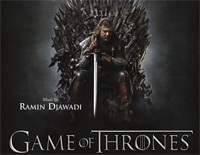 Game of Thrones Game of Thrones is used as a piece of insert music for the American fantasy drama television series with the same name. And the music was composed by Ramin Djawadi. Game of Thrones is created for HBO by David Benioff and D. B. Weiss as showrunners and main writers. It is an adaptation of A Song of Ice and Fire, George R. R. Martin's series of fantasy novels, the first of which is titled A Game of Thrones. Filmed in a Belfast studio and on location elsewhere in Northern Ireland, Malta, Scotland, Croatia, Iceland, the United States, Spain and Morocco, it premiered on HBO in the United States on April 17, 2011. Two days after the fourth season premiered in April 2014, HBO renewed Game of Thrones for a fifth and sixth season. Meanwhile, we also offer different version of Game of Thrones sheet music for you to download