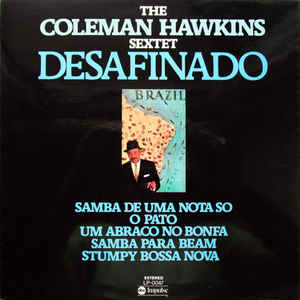 "Desafinado," a Portuguese word (usually rendered into English as "Out of Tune", or as "Off Key"), is the title of a bossa nova song composed by Antônio Carlos Jobim with lyrics (in Portuguese) by Newton Mendonça. The English language lyrics were written by Jon Hendricks and "Jessie Cavanaugh" (a pseudonym used by The Richmond Organisation). Another English lyric, more closely based on the original Portuguese lyric (but not a translation) was written by Gene Lees, and appears on some recordings as well. The version by Stan Getz and Charlie Byrd (from the album Jazz Samba) was a major hit in 1962, reaching number 15 and number 4 on Billboard′s pop and easy-listening charts, respectively; their definitive rendering also reached number 11 in the UK, while Ella Fitzgerald's version made number 38. The song was voted by the Brazilian edition of Rolling Stone as the 14th greatest Brazilian song.