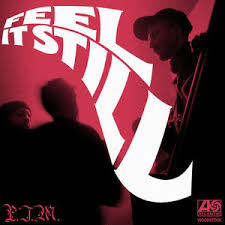 "Feel It Still" is a song by American rock band Portugal. The Man. The song, which has interpolations from The Marvelettes' track "Please Mr. Postman",was written by the band along with John Hill and Asa Taccone, with the latter two serving as producers. It serves as the second single and first radio single off their eighth studio album Woodstock. The song reached number one on the US Alternative Songs, Mexican and Russian Tophit airplay chart, and became their first entry on the Hot 100, reaching number four as of October 2017. It was also featured in advertisements for the Apple iPad Pro, Vitamin Water, YouTube TV and in the first trailer for the 2018 film Peter Rabbit.